Living in the Future

It is amazing to find out that Singapore and Cuba have quite a few things in common, especially when it comes to their concern for their people, despite the fact that the two countries are very far apart geographically and they have very different cultures and histories, and very dissimilar economic development, something which inevitably establishes a specific limit to the attainment of dreams

Giant trees in the Gardens by the Bay. At the end you can see the dome of one of the huge green houses in the South Garden Autor: Herminio Camacho Eiranova Publicado: 31/10/2017 | 06:07 pm

I dare say that in Cuba we do not know much about Singapore. Of course we know that it is one of the four «first generation» Asian Tigers or Dragons along with South Korea, Hong Kong and Taiwan. They are called that because of the high rates of economic growth and industrialization they have maintained between 1960 and 1990, allowing them to be among the most developed economies in the world.

We may have information about some aspects of bilateral relations, such as the agreement on reciprocal visa exemptions signed in June 2015 by Foreign Minister of Cuba, Bruno Rodríguez Parrilla, and the then Singapore’s Minister of Foreign Affairs and Justice, Kasiviswanathan Shanmugam, during the latter’s official visit to Cuba; that products such as nimotuzumab, a humanized monoclonal antibody with promising results in different types of cancer treatments, and the Cuban therapeutic vaccine for lung cancer, both from the Center of Molecular Immunology, enjoy great prestige in Singapore; or that the Mariel Development Zone’s container terminal, inaugurated in 2014, is managed by PSA International, a Singapore-based holding company world leader in port operations.

But only a few articles by Cuban professionals who have attended the East Asia-Latin America Cooperation Forum’s Journalists Visit Programme have brought Cubans closer to Singapore’s reality. The program’s 18th edition, in which I had the opportunity to participate, was held this year from September 25th to 29th.

I was especially impressed how many of the persons which got in contact with, including officials from different areas and levels, and ministers in the government of Singapore, were familiar with the real Cuba, specifically with its achievements in health, biotechnology and scientific development, and not with the image presented by the large transnational media; some of them had even recently visited our island.

On the other hand, it is amazing to find quite a few aspects in common between nations so far away from each other and with such different cultures and histories and very dissimilar economic development, something which establishes a specific limit to the attainment of dreams.

It bears mentioning that like Cubans, the people in Singapore are very proud of the aspects which identify them; something which do not happen so often how one might imagine in our cosmopolitan and globalized world. This is all the more surprising in Singapore, with a resident population of very diverse origins (according to the 2010 census, 74.1% are of Chinese descent, 13.4 % of Malay descent, 9.2 % of Indian descent, and 3.3 % are from other origins) and where just over 20% of the population was not born in the country.

The determination to overcomes seemingly insurmountable obstacles and working to find solutions to adverse circumstances and to move forward also characterize both Singapore and Cuba.

A case in point is the water supply situation facing Singapore. Collecting rainwater or desalinating seawater helps cover part of what they need, but they must cover another part by importing water from Malaysia. The rest, which today is about 30 % of what the country requires (by 2060 it is expected this will reach 50%), is the result of purifying used water from industries or from the residential sector.

A sewage system has been created in the city (Singapore is a city-state) for the collection of wastewater from the northern and eastern sectors -separate from the rainwater collection system- that is directed into a deep tunnel and from there taken to a treatment plant. Subsequently some of the water is returned to the depths of the sea and some is sent to a factory where the water is purified, as they explained to us, to attain quality levels that exceed those for normally consumed water: they call this ultra-clean water NEWater.

Although NEWater is safe to drink and exceeds the parameters established by the World Health Organization in this regard, it still has to win over public acceptance and so it is mainly used for industrial purposes. A small percentage of it is mixed with the collected rainwater and then subjected to a new purification treatment before supplying it to consumers.

Singapore expects NEWater to guarantee its hydraulic sustainability; to this end it foresees installing a wastewater collection system in the southern and western sectors in 2024, with a second deep tunnel, another treatment plant and a new NEWater factory.

Far from comparing very different contexts, I cannot help but think about the hydraulic will of the Cuban government when we have the chance to see the efforts of the Singapore authorities in solving such a very complex problem that is top priority for the population. The Cuban government has done much since the triumph of the Revolution when the infrastructure in this area was practically non existent, and it continues to work on this today, to guarantee drinking water supplies, in climatic conditions characterised (other than in certain periods) by an ever more intense drought affecting almost all the regions of the country.

Protecting the environment is a priority in both countries. In the Asian nation this is specially evident in the strategy designed to turn Singapore into a City in a Garden. We should clarify that the Singaporeans make a clear distinction between the vision of Singapore as a Garden City and the current one which took shape in the 21st century, the vision of a city enclosed within a garden. The Garden City notion was conceived and promoted in the 1960s by the founding father of modern Singapore, the then Prime Minister Lew Kuan Yew, to counteract the effect of urbanization on the deforestation of the country and to improve the quality of life.

Part of the vision of Singapore like a City in a Garden includes the establishment of first-class gardens. We were able to visit two of these; the Botanical Garden of Singapore founded in 1859 and granted World Heritage status in 2015 by UNESCO, and the Gardens by the Bay, an immense park integrating three enormous gardens: Central, East and South.

The most extensive one is the South Garden, inaugurated in June 2012 and the only one that has been completed.  Showing the best of tropical horticulture and the art of gardening, it is distinguished by two colossal greenhouses: the Cloud Forest and the Flowers Dome. There are also artificial trees up to 50 meters high, creating immense vertical gardens.

Although Singapore is a small country, with an area of approximately 700 km2 (smaller than Havana), and highly urbanized, about 10 % of the land has been destined for parks and nature reserves, and today almost half of the city is covered with vegetation. But what we could see goes far beyond statistics. It is truly impressive to see how you encounter vegetation in the most unimaginable places: walls, columns, pillars and even the walls of buildings. They are almost obsessed there to take advantage of every possible space for this purpose.

Singapore and Cuba also share what the Cuban poet, playwright and narrator Virgilio Piñera expressed in his anthological poem, La isla en peso as «the damned circumstance of water everywhere.» The truth is that the insular condition is not, at least from the geographical point of view, precisely a blessing in these times when climate change is more than a potential threat, translating into ever growing dangers and challenges for island states.

One of those dangers having major consequences, the rising sea level as a result of global warming, is a significant concern for Singapore’s authorities, due to its insular condition and the fact that their territory is currently largely composed of reclaimed land.

Just as Cuba, Singapore has a state plan for confronting climate change, an entire strategy to face the phenomenon, planning that the height of building foundations in certain areas take into account the levels that may be reached by water in different periods. And when this level makes building on the main island impossible, they are already planning to organize life on floating platforms. This sounds like science fiction to many even though in reality it involves technology that goes far back in time.

We could talk about other features shared by Singapore and Cuba, and also mention quite a few differences that go beyond the purpose of this initial approach. Perhaps it could be the subject of another article about a State which, like Cuba, focuses its attention on its people. 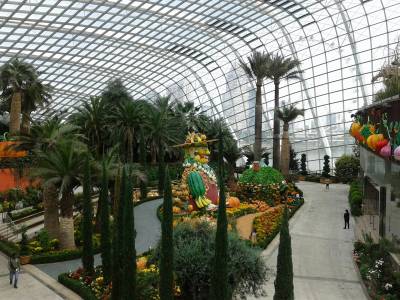