The panelists recalled that Ernesto Guevara is one of the figures of Latin American revolutionary thinking. 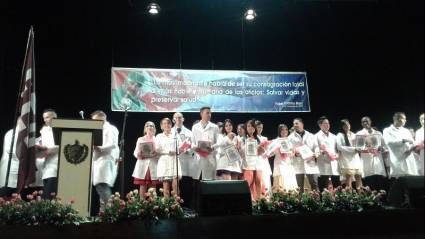 HAVANA, Cuba, Oct 5 (acn) Che's example will have to always be among us if we want to be a true health professional, said Maria del Carmen Amaro Cano during the "Che Doctor, Humanist and Revolutionary Colloquium".

The encounter, held in the theater of the Calixto Garcia University Hospital, was directed to the new and future generations to reflect on the validity of the valuable humane legacy and the internationalist fighter.

The panelists recalled that Ernesto Guevara is one of the figures of Latin American revolutionary thinking.

Marcia Garcia who was a doctor in El Salvador emphasized on the time of the Heroic Guerrilla and his projection on the need of a Revolution that supports the efforts of each doctor in favor of saving the lives and also society.

Alberto Cespedes Carrillo, specialist of the National Oncology and Radiology Institute recalled his three encounters with Che, in which he discovered the exceptionality of the Legendary Guerrilla and the importance of medicine.

Dr. Carlos Alberto Martinez Blanco, Director of the Calixto Garcia University Hospital urged the participants to persist in the slogans of the Pioneer school children "We will be like Che!", in Commander Fidel Castro's desire for the new generations to continue the example and model of the new man of the 21st century.

Che is much more than a simple photograph, a leader or something that exist in the memory, concluded Dr. Martinez.