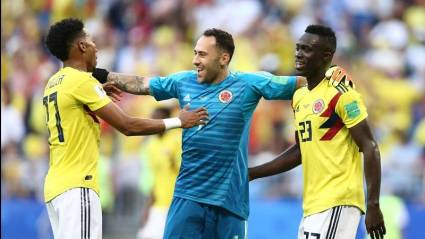 Just a few doubts remained about the capability of Russia 2018 to surprise us after surpassing the first half of the tournament. Sometimes, the amazement came due to quality teams´ mistakes and some others came by the second chances some other selections had after a difficult beginning.

If the way Germany was defeated by South Korea and eliminated in the group phase was shocking, the Colombian performance was all the way around. The men under the orders of José NéstorPekermanwere surprised by the Japanese rush.Later they knew how to improve their acts and earned a victory that exceeded the capacities shown in the South American eliminatory phase.

The Colombians in its  gameagainst Polandsdelivered a superlative show starring James Rodríguez,Juan Fernando Quintero and RadamelFalcao. Also, the defensive player Yerry Minahad his redemption after a forgettable year in Barcelona.

The Colombian selection had to earn a victory that would not jeopardize its position after the results obtained by Japan and Poland.The first half against the Senegal selection was not easy. The South Americans had to contain the Africans attack rush also,tried to counter attack unsuccessfully. In the defensiverolethe key factor was the performanceof goalkeeper David Ospina.

At the end of the first half James Rodrigues suffered a lesion and was substituted by Luis Muriel who would have a decisive role later on. In the second half, at the 74’ minute,in a shot that came from the right corner YerryMina got the chance andscored with a header that escaped the reachof goalkeeper KhadimN’Diaye. The Samara Arena was filled with joy because Colombia was classifying to eight finals.

Meanwhile, in Volgogrado,Poland was decided to defend its honor against the Japanese team which had to achieve, at least, a draw to remain in the tournament.

Despite the disregarding between captain Robert Lewandowski and his team, they had several chances to get ahead. However, the Asians had their chances too.In the beginning of the second half, everything was more of the same until Jan Bednarek performed a header in the Japanese goal zone and added some tension to the match.Later, the men under the command of Akira Nishino realized that they passed to eight finals due to having less yellow card penalties. The Japaneses only received four admonitions while the Africans got six.At the end Fair Play defined the result over the goals.

The Japanese selection celebrated the classification to eight final with its fans. Photo: Getty Images.